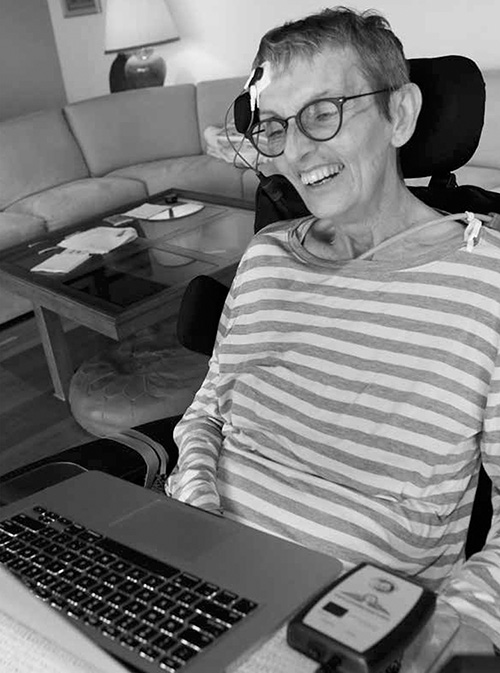 Janet Abraham is a participant of the Hunter trial site and has motor neuron disease.

Janet’s story shows how the NDIS can transform the lives of people with disability as well as their families.

Janet is now able to send text messages, communicate with Skype, send emails and go on the internet through the NeuroSwitch.

The NDIS has funded the NeuroSwitch technology, as well as installation, coding and training for Janet to use the technology and a year of technical support.

The communication equipment measures and records the electric voltage sent by a person’s brain to their muscles, allowing Janet to communicate through a computer.

Her husband Joseph Abraham said he believes this piece of technology is radically changing Janet’s way of life. “Since being able to communicate again, the smile hasn’t left her face. It’s like she has been released, after being trapped in her body,” Joseph said.

Joseph has told us that the communication device will improve her quality of life especially when expressing her needs to doctors and hospital staff, particularly when she is in pain.

“She’s enjoying sending text messages and being able to do anything anyone else can do with the computer, plus talk, call and eventually she’ll be able to drive her chair – she’s become free again,” he said. The NDIS has also provided supports like car modification, personal care, a wheelchair, contribution for taxi fares and a platform lift.

“The NDIS funded a pressure relieving mattress for Janet, and this has significantly improved her sleep ... she used to wake up because she was in so much pain,” he said.

Joseph has explained to us that without the support of the NDIS, the way Janet’s life has improved with the NeuroSwitch would not have been imaginable.

Janet's story by National Disability Insurance Agency is licensed under a Creative Commons Attribution-NonCommercial 3.0 Australia License.
Based on a work at http://www.ndis.gov.au/progress-report-2015.